eighty-three & ended up on time magazine.

While we were getting it in like Ak-47 fullies

with fully loaded magazines, then

Those who were there know what I just

dead. It left a whole lot of mothers grieving

I was held in deep and leading where I was

Praying for a way through it but beast enough

to rise to it and those in power knew it.

You’d think a shootout up close would fuck a

child up the most but my inability to get close

is what stood out the most, or perhaps

the discomfort of my enemies standing close.

and Ronald Reagan’s “War On Drugs” was a

The CIA was running the crack through

through who became prison gang troops.

Grown men no longer “youth” but, our

to get to the glue; though my gang was red

everybody in prison wears blue and how well

you got your ass kicked defined you even refined you

I’ve endured too much pain to be lying, dude!

They don’t want me speaking spoken word to

this so that’s exactly what I’ll do. I’m the breed

they bred when their hate bred me too. Trapped

me like a beast and raw meat is what they fed

me too. While savagery is what the lead me to

what I was really lead to was the smelting of GOD

that lead me through.

Blessed with the sense to ask just how we were

mislead and blew it. So, I found one of the founders

a black panther connection to it and agencies like

You see, the panthers had a movement going,

The kind that young soldiers were missing.

So, they assassinated Bunchy Carter while

the youth were listening. Are you listening?

Los Angeles street gangs were the soldiers that

So, they quickly dispatched the black panther

party, but hardly because bastard babies were

were youth without direction, never got to finish

the lesson plus legislature rewrote the laws

in ’77 that flipped the penitentiaries to prisons.

Now listen? They followed it up by building 33

more prisons and put them up on wall street;

J. Edger’s plan was cast and set and we fell

into the plan by being niggas and putting negus

To make sure that we were good and broke,

to be raised in literal prison camps, no joke!

All the while we were wilding out doing

drive buy’s prohibition-style ‘cause most of

our elders were crackheads now.

Remember what I said before about Li’l

who kicked in the wrong door and became a

what was the publicity for?

Now let me speak candidly, I was only 13

when I had a russian made AK-47 handed

to me and the need to use it would demand it

of me. I was a standard bearer with a bandanna

on me and every bandanna, wearer became a

The madness had a hold on me which took a

LIFE sentence in the penitentiary for me to

mentally break free. But first I had to break me

in order to stand over the BREAKING. The

extermination of an entire generation was in the

making and I was at the heart of the whole thing.

This is turf talk, not some conspiracy theory.

I just walked 27 years in prison so you can hear me.

we couldn’t figure out where we fit HERE, you see?

Babies full of rage with no identity so like

the rest of the beast I took to the streets and

adopted the worst name given to me.

But they knew we were more…

So, they stop calling us MOORS and taught us

That we were no Moor than slaves.

They know that we built Universities when

they still lived in caves. In comprehending the

mind of the enemy, in order to justify their

inhumanity, they had to lie that fact away.

and looking for Power in that today.

Confused by how that defines away our

reaction is blood & cripping today but in all

But we sit up all day playing video games and

It’s insane but I’m putting you up on game

however, that’s not the only thing insane.

and these are the conditions for which they

train our youth in. Plus, teachers teaching in

communities they don’t live in. Listen?!

Strangers with our babies is a new spin but

now there’s a new trend calling each other

KINGS & QUEENS without really knowing what

that means. Yet and still, I encourage that type

of thing. But it’ll take Moor than that type of thing

to get this thing right. You know what I mean?

I mean, a man would have to first be a MAN before

queen. Plus, being the jester for another’s entertainment

has never been a royal thing; here’s another thing,

our babies are popping pills and doing strange things.

So, we best to man up and do some brave things.

about the same things. We have to get reacquainted

with our elders, stand on tradition and be weary of

these new things. Get back to drum playing, shaka

the Spirit to do so caringly, are you hearing me?

So, listen to me? This is not some mindless rap song

panhandled by big industries; this is that last poets

struggle through and through. We started in the struggle

but somewhere we were duped.

We went from the panther party “Black” to the

Excerpt from his book Serengeti Noise

$12.95 Plus Shipping ~ Available at CTU Publishing Group and Amazon.com 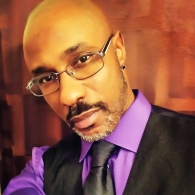 Kesau’c N. Hill is an ex-gang member who, at the age of sixteen, was convicted of murder and sentenced to serve 15-years to Life in the California Department of Corrections. Fighting became a lifestyle that would accompany the gang world deathstyle. However, he would soon be mentored by an English teacher named John Murphy who saw past his tough guy exterior into something explosively creative.

He introduced him to the art of poetry and the power of the spoken word. He’d use that power to his advantage when his life serving Life became too difficult to bear. By defiantly writing poetry all over his prison cell walls “meaning” and “Passion” was discovered, hope and a sound vision was realized. Quite literally, poetry saved his life.